9/24/22 - More cleanup of website stuff, pc/laptop site should be mostly ok. Mostly I need to work on the mobile version but I'm wondering how I should handle that...

I also did a lot of work on a zine. I want to try the penpal stuff again. I think it will work better this time as I am going to a zine convention mid-October so I will be able to distribute it there. I might have to extend my PO Box. I don't think I'll make it in time to close it. @_@

I also ran a bunch of smaller errands. Geting stuff in preperation for part time in the office work. Fun stuff for zine making. Just being outside and getting sun and fresh air before winter hits.

I didn't make it to the book fest. I woke up really early then took a nap and got ready too late. Honestly I was doing a lot of zine stuff and watching Violet Evergarden so it wasn't a waste of a day, but its a bit disapointing. I am trying to get out more.

Whenver I don't know what to do with myself I check out a coolguy zine and all is right.

9/23/22 - I am caught up with all 9 episodes of Natsume Yujincho that are English dubbed. I really enjoy the show as a background show but don't want to have to read subtitles for this one. Its a little slow paced for me to be staring at the screen the entire time. Luckily it releases every Sunday so a new one will be up soon.

My head hurts, I will have some tea. Its been genmaicha lately. Probably my favorite tea this decade.

I will have to go into the office some days coming October. I am not looking forward to it. Especially this season, I enjoy it but feel awful. Constant headaches. I will be driven which is nice, especially since I am sharing my once personal car now. Not sure how that will work going forward.

I am going to a book festival tormorrow and I am exited. But I also have a lot of chores to do.

9/22/22 - I've paused Aoashi. I think I am burned out from sports anime. It was solid, but something about the protagonist was hard to watch. I'm watching the Natsume Yujin Cho dub and I think I am more in the mood for this. I've wathced two sports anime previously so it makes sense. Just a change of mood.

Site wise there's so much stuff I've made over the years that isn't accessible. I'm trying to consildate it and maybe clean things up. Its good stuff, just formatted for older layouts.

Kabaddi feels like the sport that if I had known it existed, I'd be more of a sporty type person. Something about it just appeals to me. Also its a sport where you can do backflips or tackles and its legit.

I also love Wes/TwentyTwo Zine's stuff. He recently put out a cool #YouintheTarot video. I'm not knowledgable on tarot but this seemed incredibly therapeutic.

9/21/22 - I saw a bob cat today. She was limping and had kittens. It was amazing and worrying. We notified the state authorites. Hopefully they will help her.

I started watching a video on Webtoons and my blood pressure went up a bit. I remember when Webtoons was just a place to read legal translations as opposed to poaching tumblr comics. I miss those days.

Now its the same content silo squeezing blood from a stone. I suppose I'm preaching to the choir, but another reason to abandon them and embrace web 0.

In other news I am back to watching anime, especially sports/competitve anime. I really am enjoying my time with Dance Dance Danseur, Salaryman's Club and Burning Kabaddi. I really connect with the found friends/family aspects, personal growth and passion without romance/sex elements. Shoot I'm only typing this as Crunchyroll crashed.

I've been keeping up eating under 1600 cals or less. It feels like cheating in a way. Too easy. I used to struggle so much. I wonder what changed? Or maybe I'm miscounting everything. I will know in a few weeks. I need to get a scale but do have a starting weight from a dr apt. I'm not working out too much though. Baby steps. 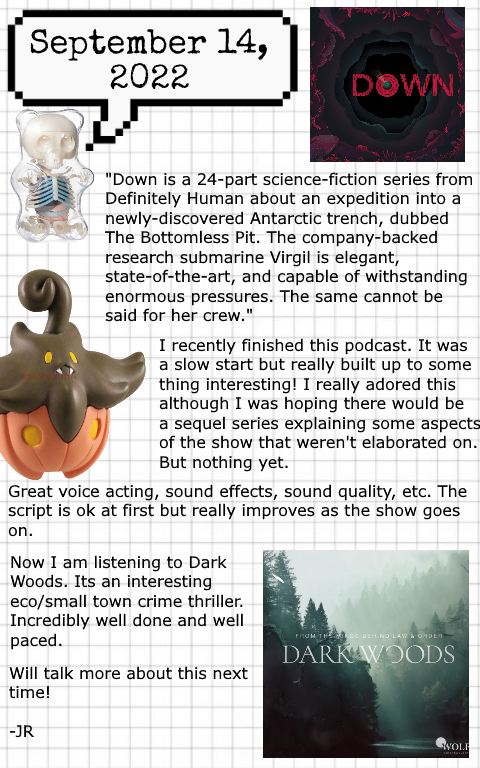 Emotions are a mix of ok and struggling.

I am listening to Down, a scifi deep ocean podcast. I'm really getting into it. I think its horror but its a slow build currently.

Feeling a bit melancholy today. Its a gray day. Will probably rain later. I had a productive morning but I still want to cry. I even watched some great short films. I wish I could at least be satisfied but I really want to crawl back into bed.

There's a zine fest I want to go to but I don't have many zines to share. I am thinking of making some one page zines in a weird envelope format.

Its later today and I have been looking a lot at events. I want to try to do 2 outdoor ones a month. Maybe a few online ones like reading sprints.

I am taking some big steps towards a healthier life including trying to lose weight and workout more. I've always struggled so we will see how long this lasts. 2 days so far.

I've watched a lot of Digimon Adventure 02 and Gundam Build Fighters Try. Will probably finish Try soon and move onto the original show. I'm not sure how much of Adventure 02 I want to watch after the defeat of the Digimon Emperor. Probably one of my favorite anime moments. Also upon rewatch, props to the English voice actor of Ken Ichijouji. He has a lot of range of the same voice, really fleshing out Ken.

Midnight:
The day just started. I woke up so I did get a few hours but need a few more hours if I don't want to be a total disaster at work. I wonder why I keep waking up at midnightish lately.


Tried to sleep. Can't. Also my cat stated zoomies. Its that time.


Morning: Now its morning, right before work. Again, hard to wake up but I am coping. I hope one day it will be easy again to wake up.


I actually kind of cleaned out my email but unsuscribing to stuff. A big deal for me! I may take on a little bit each day until its not full of crap again.

11:30 PM ish...
Anxiety is getting worse. About work again. Its not a huge deal but it feels like one to me. Its a situation where I'm not the best but I'm not the worst. That is something, right? Maybe its childish to say, but I miss being the best if only as it saved me anxiety. I'm not sure why I am missing things. Its... I feel shitty. It makes me think about if I should try to get another job but will it be any different? Will I be good or did it get sucked out of me? I can't explain what is going on, but I am not slacking. I kind of wish I was. Then I'd have a reason.

Waking up is hard but I'm getting better at waking myself up.

I'm finding a lot of joy in short films. I really enjoy family drama, friend drama, or just a meeting point between two different people. Its such a breath of fresh air from thirsty media.

If I am having an issue its that I both want to eat and don't want to eat at the same time. I wish smoothies filled me up. I'm very much in a 'I would like to drink a smoothie or eat a granola and move on with my life' kind of mood.

I'm slowly making my way through Compost, a digital zine about the net.

Currently here: COMPOST Issue 01: You Are A Strange Animal by AC Gillette

I feel like I got a bit lost around the part about machine learning, although I think I got the overall message.

I'm watching lots of short films and having a really good time. You can see my 'recs' in the asexual stuff part of this site. I tend to gravitate towards the ones that are family or people dramas or comedies with some documentary or experiemental stuff thrown in.

I still keep thinking of Vivy: Fluorite Eye's Song, a sci-fi anime about humans and AI. Honestly that description is underselling it. It some ways its more about humanity and music. Its funny as I just watched it on a whim.

Morning before work. I don't feel great but I should survive. I just took some meds and my hot tea is cooling hopefully it will help.

After work, mostly a slog due to feeling awful from the weather but I got better.

I've been sick recently and I don't like it. Partner is out to get me meds. I am drinking hot tea. My ears won't pop. I have work tomorrow. Good luck to me.

I've fallen into a rut. Maybe depression. I really struggle to have fun and do basic things. I think it all started when I stopped being able to read and listen to audiobooks. Then it snowballed into things like videogames, zines, etc. Funny thing is I was feeling super accomplished around May, but its kind of been downhill.

The year is almost over this year. I wonder if I am burnt out from doing stuff. I did CBT, working out, trying to feel healthier. I'm not doing any of these things any more. I wanted to accomplish a lot of things this year and I technically did, but I wonder if I did too much. I think I expected myself or my life to change more but it didn't.

Sorry to be so whiny.